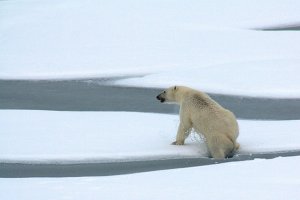 THIS month has seen qualified good news for polar bears. On December 16th researchers from the United States and Canada predicted that even though the extent of the summer ice in the Arctic Ocean is expected to decline precipitously over the next few decades, a refuge of sorts will remain for them. Meanwhile, in a paper in Nature, a group American climatologists argued that a sudden and irreversible decline of the sea ice may, after all, not be the most likely outcome of global warming.

The refuge will be along the northern shores of Canada and Greenland, Stephanie Pfirman, of Barnard College in New York, and her colleagues told the autumn meeting of the American Geophysical Union in San Francisco. Even in summer, ice will persist there because increased melting will be compensated for by the arrival of ice from the centre of the Arctic Ocean, and even from as far away as Europe and Asia. Then, as now, prevailing winds and resultant ocean currents carry ice to North America. That is why the ice on the Eurasian side is typically young and about one metre thick, whereas that near Canada can be eight metres thick and as many years old.

Dr Pfirman arrived at this conclusion after running a computer model called the Community Climate System Model version 3, or CCSM3, which was developed by the University Corporation for Atmospheric Research in Boulder, Colorado. According to this model, the Arctic Ocean will be more or less ice-free by 2050 if no special effort is made to reduce greenhouse-gas emissions – the "business as usual" scenario. The reason is that when large stretches of ocean, for lack of reflective ice cover, absorb more heat from the sun than is usually the case they will be unlikely ever to freeze over again. Even after this destructive feedback cycle has taken its course, however, the model’s calculations of ice growth and transport show that the refuge at the American side of the Arctic, all 500,000 square kilometres of it, will be there for the last polar bears.

For survival, the bears do not just need sea ice to walk about on. There have to be prey for them to eat as well. It so happens, says Brendan Kelly of the National Marine Mammal Laboratory in Alaska, that the ringed seals and bearded seals which polar bears specialise in catching will be all too happy to live in the refuge. An important requirement for seals is thick snow cover in the spring, to dig lairs in. These lairs protect them and their young from the cold and make it harder for polar bears to spot them. Climate models generally predict more snow as the temperature rises, but much of it, says Dr Kelly, will fall in the autumn on a sea that has not yet frozen over. The refuge will be the only place in the Arctic where a lack of snow will not be an issue.

The sea mammals and their hunters would have even fewer problems if fears of climatic feedback in the Arctic proved unfounded. The paper in Nature claims that they are. A group led by Steven Amstrup of the US Geological Survey’s Alaska Science Centre ran CCSM3 with several assumptions about reducing greenhouse gases. Dr Amstrup concluded that although the sea ice does shrink, it does so gradually and in proportion to the temperature rises that result. Sudden disappearances of ice do occur, but the Arctic seems able to recover from them. This is important, as it will give humanity more time to reduce its emissions and it improves, among many other things, the chance that polar bears will survive as a species.

The paper’s authors mention a number of factors that may counteract a runaway melting cycle. One is that the extra absorption of sunlight may be less than feared because the maximum area of open water occurs at the end of summer, when the days are already shortening and there is usually ample cloud cover to reflect light anyway. Another, they think, is that once the summer is over, new ice grows fastest where the ice cover is thin or non-existent to start with.

Meanwhile, in San Francisco, Dr Pfirman and her colleagues warned against complacency. They noted that CCSM3 does not do a good job of describing the rapid decline of the ice in the last decade. And since the reduction of greenhouse gases is not coming along as quickly as the Nature paper would have it, it seems wise to start treating the refuge area as a precious resource - for instance by keeping new shipping lanes in the Arctic as far from it as possible.